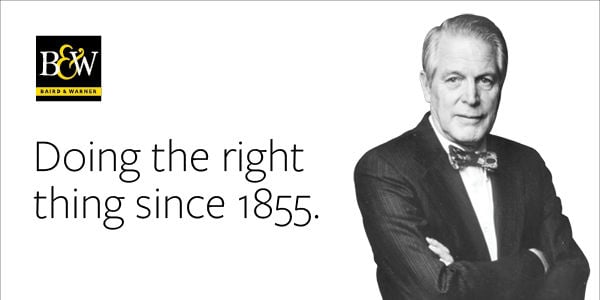 In honor of Fair Housing Month, we’re spending April sharing more about Baird & Warner’s long history of doing the right thing when it comes to opening up housing opportunities for all.

When John Baird, father of our current president, Steve Baird, was president in the 1960s, there were ongoing fair housing debates at the local, state, and federal levels. Some civic leaders actually felt that making it illegal for sellers to discriminate against whom they sold their homes to based on race or religion infringed on the owners’ individual rights.

That’s why we’re deeply proud John Baird took a stand to protect the rights of all people to have equal access to the home of their choice.

He testified before the Chicago City Council and the state General Assembly, and he even resigned his position on the Chicago Real Estate Board in protest when it decided against supporting fair housing rights. As a result of his activism, John Baird received letters both supporting and opposing his stance. In a 1965 letter to an opponent of fair housing, he wrote eloquently that fair housing should be the law of the land “if this nation is going to survive as one of the great free nations of the world.”

Today, Baird & Warner continues to honor this legacy by requiring incoming agents to undergo fair housing training to make sure they understand the federal fair housing law, which is celebrating its 50th anniversary this month. The law protects people from discrimination based on race, national origin, religion, sex, disability, and the presence of children when they are renting, buying, or securing financing for any housing.

What Does the Real Estate Market Have in Store?

The real estate market has seen a fantastic year so far - home prices are going up and mortgage rates reached historic lows. In June, both Illinois and the Chic... Continue