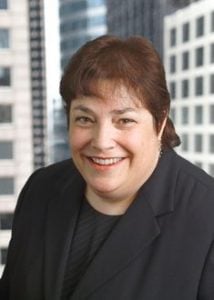 Cindy Schwartz, who has worked in the real estate industry for over 30 years, and has been with Baird & Warner Title Services since it’s inception in 2002. She began as a operations manager, but was promoted to vice president of operations less than a year later when the division was put under the Baird & Warner umbrella.

Cindy began her career in title services as a closing officer for Republic Title Company. She then worked for Koenig & Strey – GMAC Real Estate for 11 years as title examining manager. Her responsibilities at Baird & Warner include running the day-to-day operations of Baird & Warner Title Services; presenting at branch offices; overseeing special projects; helping create the budget and reviewing financial reports.

Cindy earned her bachelor’s degree in library science from the University of Missouri-Columbia and completed the paralegal program at Roosevelt University of Chicago. She has been a licensed real estate broker since 1984.