Located on the city’s North Side (10 miles NW of the Loop), Jefferson Park’s highly sought real estate is one of the most attractive aspects of this Chicago neighborhood.

The neighborhood is one of Chicago’s oldest and culturally diverse areas. Best known originally, as a transportation hub in the city’s northwest side, Jefferson Park has earned its nickname as the “Gateway to Chicago.” Offering some of the city’s best in entertainment and dining, Jefferson Park has earned its reputation as being a neighborhood with plenty to do as well.

Chicago parks and festivals attract many locals as well as tourists to the Jefferson Park community. And Jefferson Park nightlife includes a selection of bars, lounges, restaurants, and community activities. Residents also have access to other city neighborhoods through the CTA, Metra Rail, and the Pace Bus.

Jefferson Park prides itself on being one of Chicago’s most popular neighborhoods. Click here for more

Jefferson Park is also located just north of the splitting of Interstate 90 and Interstate 94. Both expressways offer access to downtown Chicago, Milwaukee, and Rockford.

Jefferson Park has been known as the “Gateway to Chicago” and a transportation hub for travelers coming through Chicago. In the early 1830s, John Kinzie Clark was the first person to establish a cabin in the area and choose his location near Indian Trails. By 1836, a school district, hotel, and many farmers were created for the small growing community.

The Jefferson Township was formed in 1850 and named after Thomas Jefferson. In 1855, residents named a village Jefferson near Milwaukee Avenue and Higgins Road. St. Paul & Fond de Lac Railroad built tracks through the area and a depot in the center of town.

The population continued to grow, and in 1872, Jefferson was incorporated as a town and by 1889, annexed by the City of Chicago. In 1900, streetcars were installed in many Chicago neighborhoods, including Jefferson Park.

To add to the population growth of Jefferson Park, expressways were built in the 1950s and gave residents access to transportation throughout and around the city. The neighborhood attracted many different cultures including Polish, German, and Italian families.

CTA trains and buses added to transportation in Jefferson Park, and the Metra trains added further connection to the city and the suburbs. Today, Jefferson Park attracts younger college students while still maintaining many family residents and a large Polish population.

Another great housing option is Jefferson Park condos. They can be listed anywhere from $60,000 to $300,000, and condos include amenities like balconies, updated kitchen appliances, large bathrooms, washer and dryers, private parking, and many more comforts in small three or four-story buildings.

Jefferson Park apartments offer studio apartments starting at $600 for monthly rent and up to $1,700 for three bedroom condos for rent. Apartments and renting is a great option for college students or smaller families not ready to purchase properties.

Parking in Jefferson Park is much like the rest of Chicago in that some residential areas may require residential permits. The city of Chicago Parking includes plenty of street parking and many homes with garages and private parking.

Some areas may require permits for residents of the area. For more information or to find areas that require permits, visit the City of Chicago Residential Permit.

CTA Blue Line Trains offer more affordable public transportation throughout the city of Chicago. The CTA Blue Line Station – Jefferson Park is conveniently located within Jefferson Park and connects to other CTA Trains and is a direct route to O’Hare International Airport.

For service from North suburbs to the Jefferson Park, the CTA Bus Route 54A – North Cicero/Skokie Blvd provides access to Skokie Shopping Malls and area popular destinations in Skokie and other north suburbs.

Another route to the northwest of Jefferson Park is the CTA Bus Route 88 – Higgins. Route 88 provides fast service from Jefferson Park to the Edison Park neighborhood and many residential areas.

CTA Bus Route 91 – Austin is another route providing city-wide service from the far north to the west side of Chicago, the Austin neighborhood, Blue Line Trains, Green Line Trains, and the Eisenhower Expressway.

Additional service is provided by Pace Bus. The Pace Bus Route 270 – Milwaukee Avenue includes service stops along Milwaukee Avenue to Niles and Glenview and as far south as the Jefferson Park Metra Station.

Jefferson Park Nightlife includes many bars, pubs, and nightlife including many affordable and relaxing places to meet friends, sing karaoke, and grab a drink.

Another local establishment is Sidekicks (4424 W Montrose Ave, Chicago, IL 60641 773-545-6212). Sidekicks keep their kitchen open till they close at 3 am and serves mainly fried appetizers, pizza, and sandwiches. They keep about fourteen beers on tap and plenty of bottled beer to choose from or pick a mixed drink from their fully stocked bar of hard alcohols.

For live theater and performing arts in Jefferson Park, The Gift Theatre Company (4802 N. Milwaukee Avenue, Chicago, IL 60630) includes many past performances like Three Sisters, One Flew Over the Cuckoo’s Nest, The Countess, and Boys’ Life. Located on Milwaukee Avenue near a Blue Line Trains station and a variety of bus stops, the Gift Theatre is perfect for any Chicago resident looking for quality performing arts.

Regal City North Stadium 14 Movie Theater (2600 North Western Avenue, Chicago, IL 60647 773-342-1763) is one of the nearest movie theaters featuring multiple screens and plenty of new releases. Don’t forget to have some buttery popcorn, candy, or something else from the concession stands.

Jefferson Park Restaurants include a variety of diners and restaurants. Whether you want to have Asian, Polish, BBQ, American, Italian, Deli, or Chinese food, Jefferson Park has something for everyone and every palette.

Smokey’s BBQ (5481 N. Northwest Highway, Chicago, IL 60630 773-763-2328) is a favorite attraction to diners within and outside Jefferson Park. The menu is full of delicious barbecue sandwiches and if you can’t decide, try the sampler platter or a mini meal deal. Customers love the smoked Turkey sandwich and everything that comes on their delicious fresh baked dinner rolls.

Another great dining spot in Jefferson Park is at the Gale Street Inn (4914 N Milwaukee Ave, Chicago, IL 60630 773-725-1300). Enjoy live music while you eat one of their delicious entrees from the menu including items like jerk chicken, filet mignon, spicy crab cakes, bbq ribs, and pull pork sandwiches with sides like garlic mashed potatoes, grilled veggies, or au gratin potatoes.

Every Chicago neighborhood has a pizza place. In Jefferson Park, one favorite is Paterno’s Pizza (5303 N Milwaukee Ave, Chicago, IL 60630 773-631-5522). Started small in 1983 as a liquor store selling slices of Pizza, Paterno’s is now a sports bar and great dinner and lunch spot for sandwiches, fried foods, and pizza. Stay and eat with the locals or take your food to go. If getting a full pizza, try the double dough crust pizza.

Jeff Fest is the annual festival for the community of Jefferson Park. Like many Chicago neighborhoods, Jeff Fest is the yearly summer celebration of the community, local businesses, and living in the area and includes live music, entertainment, local food vendors, and plenty of crafts and items for sale.

A quick view of the most influential metrics in Jefferson Park.

View our selection of available properties in the Jefferson Park area.

Get to know Jefferson Park better with our featured images and videos. 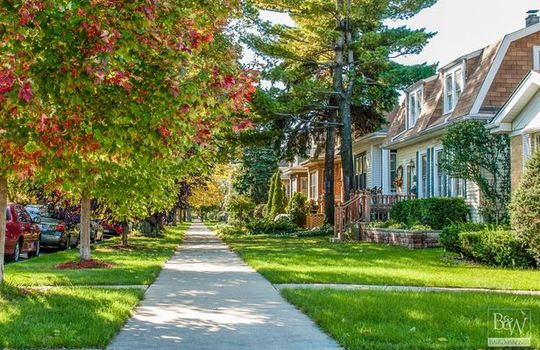 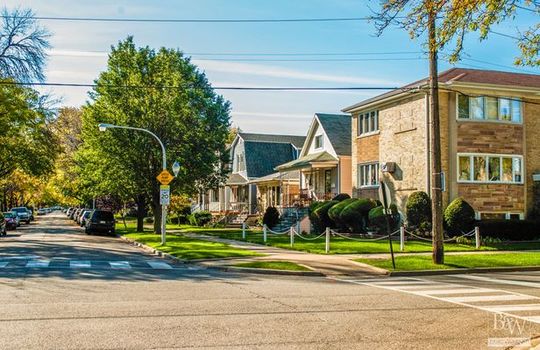 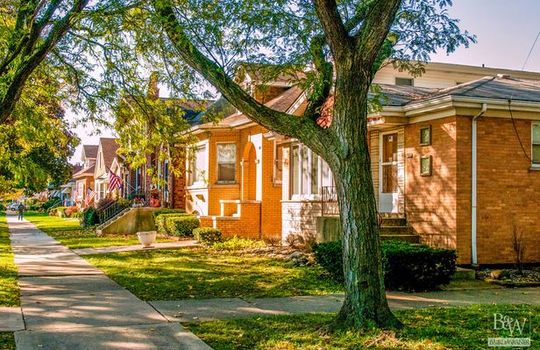 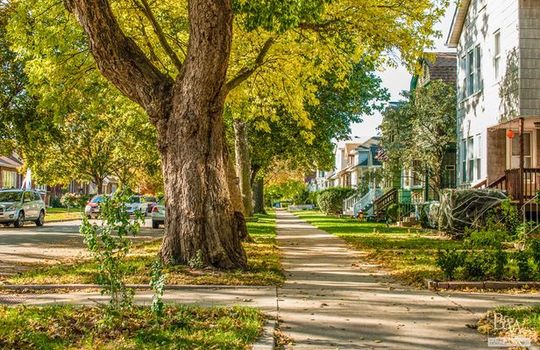 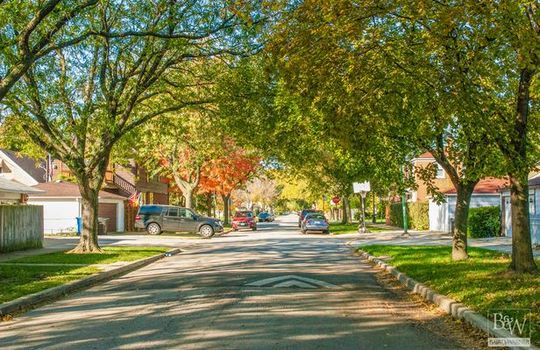 Check out the latest demographic information available for Jefferson Park.

Learn more about schools near Jefferson Park complete with ratings and contact information.

The Best in Jefferson Park

Browse through the top rated businesses in the most popular categories Jefferson Park has to offer.