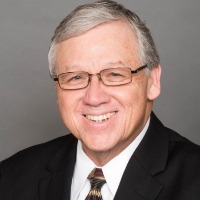 Before his career in real estate, Simpson worked in the international transportation and logistics business for 23 years. He rose from an entry level position to Executive Vice President of Operations for a multi-national firm headquartered in Chicago. During that time, he was stationed in Florida, Tennessee, Louisiana, Texas, California, Connecticut and Illinois and was responsible for offices throughout the U. S. Simpson also traveled extensively throughout Europe and Asia to support corporate clientele and international agent networks. Although not active in the business today, Simpson still maintains a U.S. Customs Broker license.

Michael is a graduate of the Kentucky School of Mortuary Science. He became a licensed Embalmer/Funeral Director at the age of 21 and practiced in North Carolina until relocating to Florida. He has been married to his wife, Dianne, for 34 years, and they have 3 adult children, 6 grandchildren and 2 great-grandchildren. They have owned their current home in Cary since 1990. Michael is an avid North Carolina Tar Heels fan, a mediocre guitar player and a lover of almost all genres of music. He also enjoys traveling the world - and a good novel.