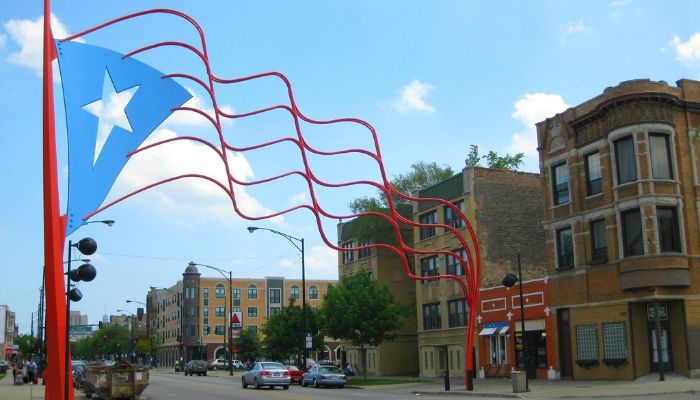 “I regard the theatre as the greatest of all art forms, the most immediate way in which a human being can share with another the sense of what it is to be a human being.”

Here in Chicagoland, there is no shortage of great places to soak in the wonderful magic of live theater. From the city to the suburbs, our area is home to some of the best theater you’ll find anywhere in the country. Across the region, you’ll find a new show to entertain you on just about every night of the week, with performers taking the stage in venues ranging from backroom comedy clubs to gleaming performance arts centers.

So, what neighborhoods should you consider calling home if you hear the stage lights calling your name? Here are six communities in Chicago and the suburbs perfect for serious theater fans:

Nestled on the northern end of the city, Edgewater is one of the area’s most vibrant hotbeds for the performing arts. This small enclave near the lake is home to an incredibly high concentration of storefront theaters, putting up professional works in approachable, intimate, and affordable settings.

This dynamic area is home to playhouses such as the actor-driven Steep Theatre, as well as the Raven Theatre, which is known for producing classic works alongside progressive new plays. Redtwist Theatre puts up thrilling, immersive works in an intimate black box space, while the Rivendell Theatre Ensemble shines the spotlight on women’s stories and voices. Meanwhile, Edgewater’s Jackalope Theatre Company develops new works that celebrate and explore diverse perspectives.

Living in Edgewater also puts you near Uptown and Andersonville, which have a unique theatrical identity all their own. Andersonville, for instance, is the home of the Chicago Magic Lounge, which shines the spotlight on the city’s most talented magicians. And nearby, the collective of artists that make up the Neo-Futurists stage an ever-changing body of work that blends poetry, news, and games into one thrilling, utterly unique theatrical package.

Known for its amazing architecture and close-knit community feel, the Village of Oak Park is full of incredible things to see and do — including a number of one-of-a-kind theatrical experiences and venues.

Near the heart of Oak Park you’ll find the Madison Street Theatre, a multi-stage performing arts center that brings professional entertainment and performing arts education to the community. The area is also home to the Open Door Repertory Theater, which puts up high quality plays, comedy shows, and cabaret events in an intimate venue.

And if you’re looking for truly timeless stories presented in unique settings, then the Oak Park Festival Theatre is worth keeping on your radar. This legendary troupe is the midwest’s oldest professional classical outdoor theater, and has been putting up open-air performances in its gorgeous Austin Gardens home since 1976. While the Theatre’s outdoor Shakespeare performances have become a summer staple in Oak Park, this group also keeps the fun going in the colder months with musical performances, benefits, and more.

When you need a little drama in your life, head into the city. North of the Loop, Lincoln Park and Old Town are two of Chicago’s favorite hotspots for contemporary theater.

Located in the heart of Lincoln Park is the world-famous Steppenwolf Theatre, one of the country’s most prestigious performing arts companies. Steppenwolf is known for its groundbreaking productions of thrilling new plays — many of which transfer straight to Broadway. Right across the street, the Royal George Theatre hosts an eclectic schedule of musicals, plays, and comedy acts in a historic space. Nearby, the Victory Gardens Theater puts on high-caliber productions that celebrate diverse voices and perspectives, while the Greenhouse Theater Center incubates up-and-coming talent and new works. Meanwhile, the Apollo Theater, Theater on the Lake, and A Red Orchid Theatre all put up exciting productions of new and classic works throughout the year.

Looking for a laugh? Right in the middle of Old Town is The Second City, known around the world for being a launching pad for comedic geniuses like Tina Fey, Steve Carrell, and Stephen Colbert. In Lincoln Park, the iO Theater puts on classic Chicago-style improv comedy on four unique stages, seven nights a week.

When many people think of Chicago, the glittering lights and theater marquees of downtown are the first images that come to mind. While the Loop is accessible from anywhere in the city, this central hub for live entertainment is right in your backyard if you find your home in River North, the Gold Coast, Streeterville, the West Loop, or the South Loop.

So, what classic Chicago venues should be on your “must-see” list in the Loop? This bustling area is home to two of Chicago’s homegrown cultural institutions, the Goodman Theatre and the Lyric Opera of Chicago. The Tony Award-winning Goodman is Chicago’s oldest and largest not-for-profit theater, with two massive stages that host an inspiring collection of new and classic works. The Lyric Opera of Chicago, meanwhile, can trace its roots back to 1954. Today, this downtown icon is home to one of the nation’s foremost opera companies.

Elsewhere around the area, you’ll find the Chicago Shakespeare Theater in a prime location on the world-famous Navy Pier. The Loop also plays host to a bevy of touring productions, which set up shop in historic spaces including the James M. Nederlander Theatre, Cadillac Palace Theatre, and the CIBC Theatre.

Located about 15 miles west of Chicago, Oak Brook and Oakbrook Terrace are lovely communities full of charming, tree-lined streets, great restaurants, and some of the most popular stages in all of Illinois.

One of the premier non-profit theaters in the western suburbs, the First Folio Theatre in Oak Brook makes it a mission to present intimate, engaging productions of both classical and contemporary works. Since getting its start with an annual outdoor summer show, the First Folio has grown, and now hosts both indoor and outdoor shows on the historic Mayslake Estate.

Not too far away, the Drury Lane Theatre is one of the biggest attractions in Oakbrook Terrace. This large theater hosts a robust and ever-changing season of shows, including high quality productions of both classic and cutting edge Broadway musicals.

With a variety of exciting shows housed in approachable, affordable venues, Lakeview is a theater lover’s dream. This picturesque, historic Chicago neighborhood is home to the popular Belmont Theater District, which encompasses a diverse range of performance spaces and companies, including the sprawling Stage 773 and the intimate performances at Theater Wit. Across Lakeview, you’ll find adorable art for children at the Emerald City Theatre, as well as dynamic and edgy comedy at the world-famous Annoyance Theatre and Playground Theater. Over on the Southport Corridor, the Mercury Theater plays host to a charming season of high quality musicals, while the legendary Athenaeum Theatre stages concerts, plays, dance recitals, comedy shows, and cabaret acts in a lush, historic space.

Looking to Live In the Heart of It All?

Looking to find a home in one of Chicagoland’s most artistic communities? We get you. At Baird & Warner, our agents are hyperlocal experts who can help you find the spot that’s just right, while making the buying process easier, at every step of the way. And with mortgage and title services in-house, our one-stop-shopping approach takes the hassle out of closing on your new home, so you can get back to booking tickets in no time.