3 Transformative Chicagoland Infrastructure Projects that Never Came To Be – bairdwarner.com

3 Transformative Chicagoland Infrastructure Projects that Never Came To Be

Highways, railroads, and other infrastructure often dictate where and how urban and suburban development occurs. Countless Chicago city neighborhoods and suburban downtowns were built around rail lines, followed by waves of development designed around cars and highways. Today, both continue to shape regional growth.

However, not all proposed infrastructure comes to pass. Some proposals are deemed not to be in the community’s best interest. Others are, but are derailed by politics, environmental hazards, or mismanaged finances, and are eventually forgotten to history.

The impacts they would’ve had–marshlands turned thriving suburbs, quiet towns turned traffic bonanzas–will never fully be known. Let’s take a look at three of the most impactful (good or bad) projects of the past 50 years that never saw the light of day in the Chicago suburbs.

A hotly contested northern extension of expressway IL 53 from Palatine to Grayslake finally got the ax in July after decades of debate. 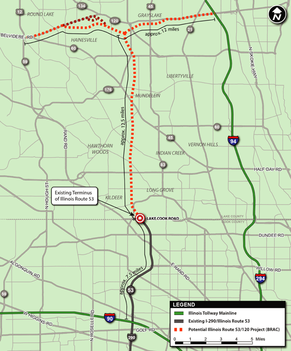 The long-proposed extension of IL 53 (and an improved east-west IL 120), deep into northern Lake County

Proponents argued it would ease congestion and shorten commutes from the deep northern suburbs, while opponents pointed to major environmental concerns and an increased traffic burden.

Unrealized impacts: The deep northern suburbs are far more built out now than when this extension first hit the drawing board decades ago. Still, extending 53 easily could have pushed the new construction of many more suburban subdivisions, and accompanying congestion, into Lake County.

Caption: Metra’s proposed STAR Line, connecting O’Hare with northwest suburbs, and then a run all the way down to Joliet 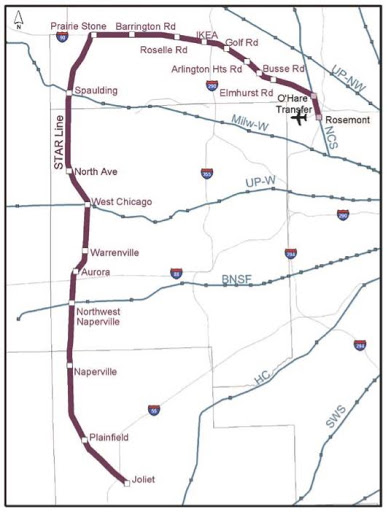 Metra’s proposed STAR Line, connecting O’Hare with northwest suburbs, and then a run all the way down to Joliet

The obvious drawback to Metra’s “hub-and-spoke” rail network is attempting to get anywhere not downtown, such as between suburbs, without having to come all the way downtown to switch trains. The late 20th century saw tremendous employment growth in the suburbs, and the  Metra network we know was poorly-equipped to serve it.

The STAR Line, Metra’s first circumferential line, would’ve helped. It was to use the I-90 expressway median and an existing rail corridor between O’Hare, Hoffman Estates, and Joliet, feeding existing Metra lines and linking countless suburbs to other suburbs.

Announced in 2003 and scheduled to be running by 2013, it was later cancelled as the cash-strapped agency struggled to make it through the recession.

Unrealized impacts: Post-recession, population growth in DuPage and Kane counties, through which STAR primarily would have run through, has become relatively stagnant. An investment such as STAR could have continued the previous growth. STAR’s route follows a handful of the few remaining undeveloped tracts of land in the western suburbs. Perhaps this could have resulted in suburban transit-oriented development–but, for the first time, with the suburban employee in mind.

A third Chicago airport in Peotone, IL airport was first considered in the late 1960s, and has resurfaced regularly in the years since. The state has purchased much of the land that would be used, but otherwise has not made much progress. 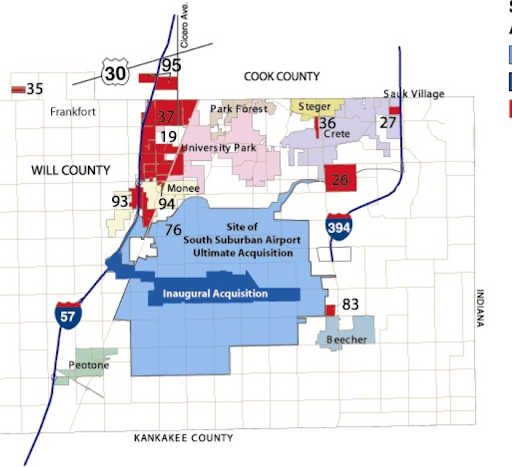 A site map of the proposed Peotone airport

While it may seem an unlikely scenario given the investments being made into O’Hare (namely an upcoming $8.5 billion “global terminal”) and Midway, this proposal has been back in the news this year with a new angle: cargo. The deep south suburbs have seen explosive growth in warehousing, logistics, and e-commerce fulfillment centers, which could lend a Peotone airport significant air cargo traffic.

Unrealized impacts: Peotone is firmly beyond the reaches of the south suburbs. That might not have been the case if it had been given a significant magnet for jobs and residents decades ago, which is what this airport could have represented. O’Hare and Midway may feel like unshakeable beasts, but it’s easy to forget that as recently as the late 70s, Midway barely had any commercial air service. Peotone, with expressway and planned express rail access to the city, could have dramatically shifted the south suburban landscape.

Don’t Remodel Without Reading This First!!

Remodeling can be a lot of fun, gathering ideas and dreaming about what your new kitchen/bathroom/living room will look like. Before you brush off your sledgeha... Continue

It's almost time to close up the pool for the year. Be sure to check these easy tips to ensure your pool is safe during the coming winter months. 1. The first s... Continue